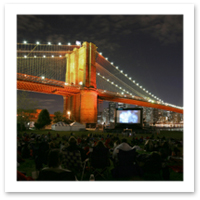 If you want a true New York summer experience, join the locals, who mark their calendars as soon as dates are set for these free not-to-be-missed events. Picnic provisions are essential for park entertainment, and in a city where real estate seems to always be at a premium, people will arrive more than an hour in advance to throw down a blanket to claim space.

1. Central Park’s SummerStage
It’s the 20th anniversary of this series, best-known for drawing top names to its home at Rumpsey Playfield. The events are generally free, although tickets are required for some of the big-name benefit concerts. Free shows this year include Los Fabulosos Cadillacs (July 11th), Q-Tip (July 18th), and Lee “Scratch” Perry (July 19th). Gates officially open an hour in advance for all shows, but plan to get there earlier.

2. NY Metropolitan Opera in the Parks
This five-borough recital series includes a SummerStage performance (July 13th) and a concert in East River Park (July 31). Information about performances and locations in other boroughs can be found on their Web site.

3. NY Philharmonic Concerts in the Parks
The annual Central Park concerts on the Great Lawn are a big to-do. Large groups come prepared with lavish picnics and fold-up chairs. The setting couldn’t be more lovely, but don’t expect anything close to silence during the show. For many, the music is secondary to cocktail hour chatter. (July 14).

4. Bryant Park Summer Film Festival
As soon as the crowd is let onto the lawn—it’s often a mad dash—the park quickly becomes quilted with blankets, so get there early. Films are every Monday evening throughout the summer, and this year include Harold and Maude (July 20), Kramer vs. Kramer (Aug. 3), and Close Encounters of the Third Kind (Aug. 17). This is the most popular outdoor movie venue in Manhattan (see 6 and 7 for other options), but if you happen to be in the outer boroughs consider Brooklyn Bridge Park’s Movies with a View in Dumbo.

6. Hudson River Park’s Take Me to the River Series
Sit riverside on the piers for these music and film events, including the popular RiverFlicks, ongoing throughout the summer Wednesday nights, with special films for kids on Fridays. Catch The Wizard of Oz (July 10), Vicky Christina Barcelona (July 15), or The Muppet Movie (Aug 7).

7. Riverside Park’s Movies Under the Stars
One of the best things about this series is that it takes place well north of midtown, on the city’s quieter Upper West Side. Films are Wednesday nights in July and August, and this year’s calendar includes The Age of Innocence (July 8), and The Out-of-Towners (July 29). There are also a handful of other well-attended events in the park, including Shakespeare (see below) and a sunset concert series at the 96th St. tennis courts.

8. Roosevelt Live!
It’s a quick ride on the F train from midtown to Roosevelt Island, in the city’s East River sandwiched between Manhattan and Queens. This festival has free concerts, ongoing throughout the summer, on Saturdays from 4-6pm at the RiverWalk Commons.

9. Lincoln Center Out of Doors Festival
Don’t miss the chance to see a free top-notch performance—everything from Hip Hop shows to a special puppet pageant for kids—outside one of the world’s most gorgeous venues (Aug 5-23). You can find more info on their Web site.

10. Siren Music Festival
If free alternative music is what you’re after, head out to Coney Island for this festival, under the shadow of the Cyclone from noon-9 p.m. Those with more energy should plan to stick around for the after party. (Saturday, July 18).

11. River to River Festival
River to River is an apt name for this festival, as the number of free dance, music, film, and theater events that take place south of Chambers Street from Memorial Day to Labor Day is overwhelming. Good thing their Web site is well organized and has a handy downloadable program. Among tons of other top-picks, this year you can see The Seven Year Itch (July 6), Arlo Guthrie (July 30), and the Merce Cunningham Dance Company (Aug. 1 and 2).

12. Shakespeare in the Park
The most sought-after seats of the summer are to one of the Public Theatre’s performances in Central Park. Although the plays are free, tickets are required and are extremely hard to come by. Luckily there are other venues to catch a Shakespeare play—Riverside Park has its own series, and the River to River Festival is doing King Lear this year in Battery Park (June 23 and July).