Besides eating and drinking, followed by even more eating and more drinking, there are actually some lessons to be drawn from the many food-focused festivals that happen around the country. I "studied" hard at the Food & Wine All-Star Weekend in Las Vegas earlier this month, which featured superstar chefs like Julian Serrano, Jean-Georges Vongerichten, Michael Mina, and a just-in-from-Europe Joël Robuchon. Here’s what I learned: 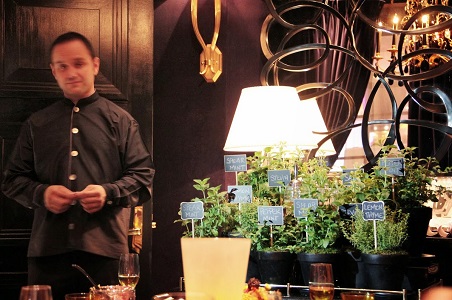 1. You can never have enough trolley service. It’s clear why restaurant Joël Robuchon, in the MGM Grand Hotel, holds three Michelin stars, and why Robuchon is known as "Chef of the Century." His exquisite cooking is downright exceptional, but he also peppers in an impeccable, Europe-meets-Vegas style of service, touting trolleys for nearly every course. There’s the butter trolley, which rolls in a mound of Brittany butter under a glass cloche, before it’s hand-carved into perfect curls and garnished with fine sea salt. Then there’s the bread trolley, delivering a dizzying array of more than a dozen bread types, from bacon-flecked to cheesy brioche. Of course, there’s also a cheese trolley, an education in all manner of sheep, cow, and goat curds. And we can’t forget the tea trolley, complete with potted herbs, waiting for their leaves to be snipped and freshly brewed. Finally, the petit four cart, with dozens of sweets, evokes feelings of being a (rich) kid in a candy store.

2. The "Chef of the Century" loves marshmallows. They dot Robuchon’s chilled corn soup, come in various flavors on the petit four cart, and some raspberry-flavored minis even stocked the parting gift bag from the restaurant. 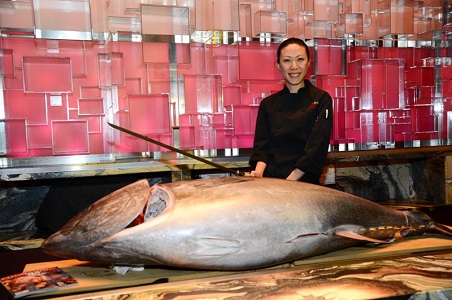 3. Sushi samurais always impress. Executive chef Heather Zheng of Shibuya is a veritable samurai of sushi, as she demonstrated at the "Ten Ways to Sushi" event, where she and her team sliced up a 300-pound, $10,000 blue fin tuna with ease. Attendees ultimately enjoyed fresh sushi and sashimi, along with tuna dishes prepared in at least eight other ways.

4. Buffets are no longer déclassé. The gourmet dinner buffet on Friday and Saturday nights at Bellagio‘s The Buffet may very well be the best deal in town. For $38.99, guests can enjoy delicacies like piles of king crab legs, a Kobe beef carving station, and a really generous kicker: unlimited caviar. 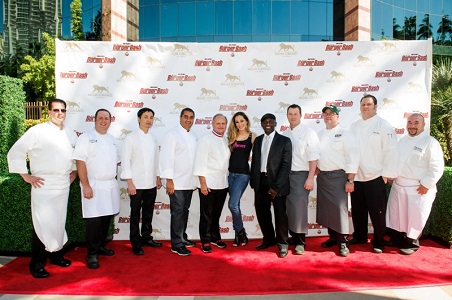 5. It pays to be a judge. Michael Mina was an arbiter on prime patties, along with Joël Robuchon, at the weekend’s annual "Burger Bash." And guess whose burger took the prize from ten entries among MGM properties? Mina’s bacon cheeseburger from Pub 1842. Coincidence? We’re not judging; it certainly was a worthy winner.

6. Art and wine make for good pairings. Picasso’s Seated Man goes well with dry Riesling, while his Woman with Beret is best admired with a Syrah in hand, according to the Bellagio’s “Art and Wine” pairings, held the second Wednesday of each month. During these events, Bellagio’s wine director, Jason Smith, teams up with Bellagio Gallery of Fine Art Executive Director Tarissa Tiberti, and the duo explore the connections between the gallery’s current exhibition and selections from the hotel’s cellar. 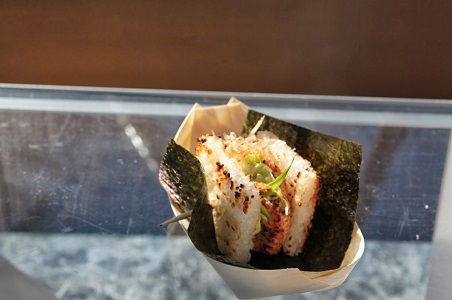 7. The breadless burger bun is catching on. New York City has seen the ramen burger; Chicago‘s Rockit Bar & Grill has the mac and cheese burger; and now in Vegas, Shibuya’s Burger Bash entry saw a salmon nori burger with a pressed rice and seaweed "bun."

8. Wine is heavenly. Ordering a fine wine is a must at Mandalay Bay‘s Aureole, where a "wine angel"—a woman wearing an LED jumpsuit—will acrobatically scale the glass wine tower to grab your bottle, twinkling all the way. Is there a better, more entertaining excuse to order more than one vintage? 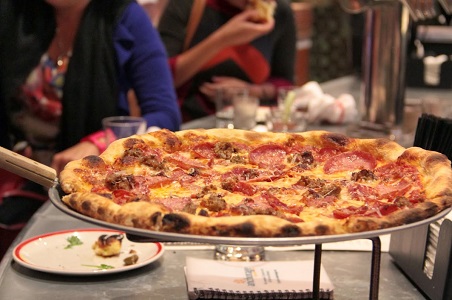 9. Omelets be damned. The very best breakfast is the first pizza that comes out of the oven in the morning, according to Five50 Pizza Bar‘s Shawn McClain. The James Beard award-winning chef was right. At 9:30am, he served up three outstanding pies: the Farmstead, with prosciutto, arugula, egg, olives, and crème fraiche; the Truffle, with potato, béchamel, parmesan, fresh thyme, and you guessed it—truffle salami and fresh black truffle; and a Gotham, garnished with pepperoni, sausage, salami, mozzarella, and grana padano cheese.

10. Excess is best in Las Vegas. Talk about an eye-opener: At the All-Star Brunch at Aria‘s American Fish, which featured dishes from Jean-Georges Vongerichten, Sirio Maccioni, Michael Mina, and Jean-Philippe Maury, there was no need to choose between a cocktail pairing or a wine pairing. They served both, in copious amounts. A decidedly delicious, though tipsy start to a Saturday. Thank goodness, what happens in Vegas stays in Vegas!

Tickets sold out for this year’s event. Plan ahead for next year, when the Food & Wine All-Star Weekend will surely pull out the stops for its fifth anniversary edition.

All photos courtesy of Kathleen Squires