"How do I get my kids interested in history?"

As the author of a series of books for adults and children intended to make history less "BOR-ING," I get that question a lot. Whether it’s a parent asking for their children, or a teacher inquiring about their classroom charges, one of my answers is: "Field trips!"

Before you run for the exits at the thought of yellow buses and brown-bag lunches, let me explain.

Growing up in Mount Vernon, New York—a city named for George Washington’s beloved Virginia estate—is not what got me interested in the American presidents. That love, I believe, came from family camping trips and car rides to places like Gettysburg and Valley Forge in Pennsylvania, and Fort Ticonderoga in upstate New York.

That’s how I learned that history doesn’t happen in books. It happens to real people in real places. And I have the souvenirs to prove it—the wooden toy revolver from my 1963 Gettysburg trip as a nine-year-old and an old snapshot of Eleanor Roosevelt taken when my family visited the Roosevelts’ Hyde Park home and the former First Lady greeted the crowds.

This presidential campaign season is the perfect time to give these historic field trips a theme—Presidential sites. Over the years and in researching my new book and audio, Don’t Know Much About® the American Presidents—I visited a number of presidential homes, museums, and libraries. So here are a few of my favorites. These are not your "grandfather’s history museums." Moldy rooms full of musty furniture are out. Many of these sites have been updated, both historically and technologically. Many also happen to be located in some of the most beautiful parts of America—making this "Presidential Tour" a great way to see the country.

For historical reasons, I’ve compiled this list in rough chronological order, starting with our first president and working forward from there. Before planning a visit, make sure you check each site for the latest updates on seasonal closings, hours, and admission fees.

Plus, scroll down to enter to win a signed copy of Kenneth’s book, Don’t Know Much About the American Presidents!. 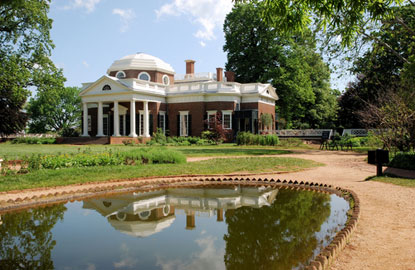 "The Cradle of the Presidency"

The first president, George Washington, and four of the first five presidents were Virginians. They were also fairly close neighbors and this makes a swing through Virginia’s "Cradle of the Presidency" a favorite trip of mine. On the banks of the Potomac, 16 miles south of his namesake city, is George Washington’s plantation estate Mount Vernon.

Staking a claim as the most popular historic estate in America, the museum, gardens, and properties are all beautifully maintained—including a newly restored working distillery. (Yes, George Washington once ran a distillery on his property and was one of the largest whiskey distillers in America.) But the reverential air for the "Father of Our Country" is tempered by meaningful discussions and evidence of his contradictions as well; the slave quarters are on full display.

(There are many other key Washington sites in and around the Washington, D.C. area, including the site of his birthplace.)

Jefferson’s controversial and complicated relationships with the enslaved people he owned are also readily acknowledged at Monticello. Situated on a mountaintop near Charlottesville, Virginia, Monticello

("little mountain" in Italian) is the extraordinary home of the third president. It was also the lifelong "work in progress" of Jefferson as architect, planter, gardener, and writer. As the giant of the American Enlightenment, Jefferson was interested in everything—and his passions are evident here, from the design and rebuilding of the house, which bankrupted him, to the souvenirs of the Lewis and Clark Expedition, and his botanical and grape-growing experiments.

Jefferson is buried here, under a marker, which includes what he considered his three greatest accomplishments—writing the Declaration of Independence, establishing the University of Virginia (in nearby Charlottesville), and writing a Virginia statute that guaranteed freedom of religion. A UNESCO World Heritage Site, Monticello (pictured) is one of the few residences (most of the others are palaces) on this international list of natural and cultural wonders, maintained by the United Nations Educational, Scientific and Cultural Organization.

A quick side trip less than 3 miles down the road from Monticello brings a visitor to what I will call Site 2A: Ash Lawn-Highland, the 535-acre home and farm of James Monroe, the fifth president and fourth from Virginia. Jefferson chose the site of Monroe’s house, which offers a view of Monticello in the distance.

It is about a one-hour drive—longer by horseback, of course—to Montpelier, the estate of Jefferson’s other friend and neighbor, James Madison, "Father of the Constitution" and fourth president. With good timing, one might catch sight of Thomas Jefferson—or at least a costumed version—as I did on Constitution Day, when I visited during a research trip. Marking the date of the adoption of the U.S. Constitution in 1787, Constitution Day (September 17) is cause for celebration here and Mr. Jefferson might join Mr. Madison and wife Dolley, along with a fife-and-drum band, for the festivities.

With its views west to the Blue Mountains, Montpelier is another imposing estate of more than 2,600 acres that was Madison’s lifelong home. Like Mount Vernon and Monticello, Montpelier now fully acknowledges the role of slavery on the plantation, with ongoing archeological digs that invite visitors to get their hands dirty. (Insider Tip: A "President’s Passport" is available offering admission discounts to Montpelier, Monticello, and Ash Lawn-Highland.) 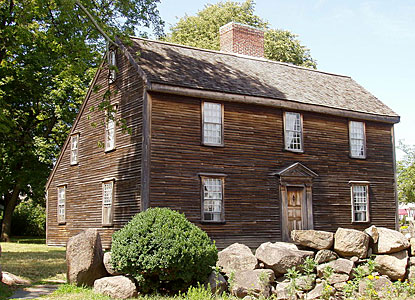 Of America’s first six presidents, four were from Virginia; the other two were named Adams and hailed from Massachusetts. John and John Quincy, the first father-and-son presidents, are honored at a site located south of Boston in Quincy, Mass., (and accessible from Boston by public transportation), which offers a "two-fer:" the story of two Presidents in one.

The Adams National Historic Park is operated by the National Parks Service and among its restored buildings are the birthplaces of both the second president, Founding Father John Adams, and his son John Quincy Adams, the sixth president. They are the oldest presidential birthplaces in the United States. The "Old House," built in 1731, and home to both presidents, is the place to learn about America’s real Adams Family, whose later generations resided here until 1927. Both men were avid gardeners and the 18th-century formal garden contains thousands of annuals and perennials.

(Insider Tip: The park closes for the season after November 10 and reopens on April 19. Also, the success of the HBO miniseries about John Adams has made this a heavily visited site.) 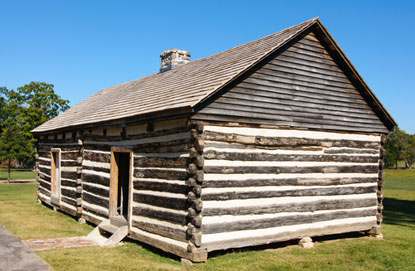 The first president not born in Virginia, and not an Adams, was Andrew Jackson, the seventh. His home, the name of which means a rural retreat, is twenty minutes from downtown Nashville, Tenn.

Successful planter and hero general before he became president, Jackson and his beloved wife Rachel –who died days before Jackson’s inauguration—are buried in the simple garden. Alfred Jackson, one of the 150 enslaved African Americans Jackson owned at the time of his death is also buried nearby; after being emancipated, Alfred remained on the plantation until his death in 1901.

The 1,000-acre estate was once a working plantation and today, its restored buildings –which had fallen into disrepair—include the original two-story log farmhouse that was the Jacksons’ home until they built the site’s brick mansion (completed in 1821), as well as three slave cabins and a restored church (the original was gutted by fire).

When I first visited the Hermitage in 2010, I was impressed by the introductory film and displays that do not gloss over Jackson’s controversial life as an Indian-fighter, slaveholder, duelist, and tough-as-nails politician. While a large plantation, the Hermitage also struck me as quite compact, and the proximity of slave cabins to the main house adds to the "up-close-and-personal" feel of the property. We sometimes forget that slavery was not political abstraction in that time, but an intimate part of daily life. 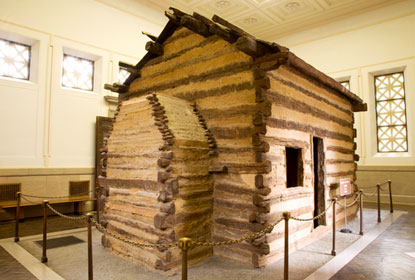 Lincoln’s log cabin birth in rural central Kentucky is a fixed part of American lore, but the actual cabin is long gone. This National Parks site near Elizabethtown is home to a "Lincoln Memorial" that marks the place where the sixteenth president was born with a symbolic birthplace cabin. The farm was named "Sinking Spring" and I got a chill looking at that still-running spring, the very water source from which Lincoln first drank.

About ten miles away is the simple site of Lincoln’s boyhood home at Knob Creek. This is the place Lincoln recalled best from his boyhood. There are no marble memorials here; just a stark reminder of the difficult life that Lincoln faced as the child of pioneers.

I have not yet visited the Abraham Lincoln Library and Museum in Springfield, Illinois, which opened in 2005. But this site deserves mention as the museum claims it has become the country’s most visited presidential library. 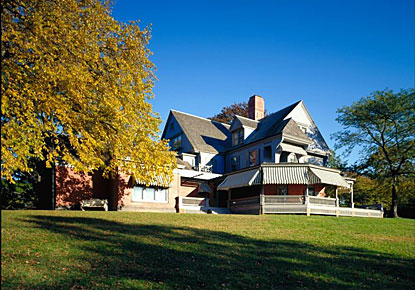 One of my lasting childhood memories is of a trip made to Theodore Roosevelt’s home in Oyster Bay, on New York’s Long Island. I can still see the towering stuffed Kodiak bear that stood on hind legs in the middle of one of the rooms.

Sagamore Hill was TR’s (don’t call him "Teddy"—he hated the nickname) home from 1885 until his death in 1919 and was the "Summer White House" when he was president. (Insider Tip: While the home is closed for rehabilitation, the Visitor Center, Museum, and park grounds remain open. Check website for updates.) 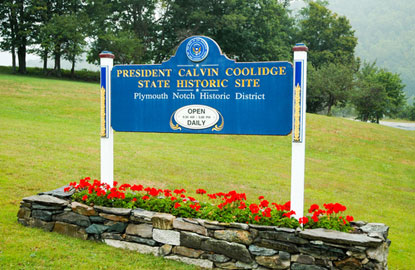 It is hard to imagine a place more removed from the grand estates of Virginia than Plymouth Notch, Vermont. But in the backwoods of New England, one August morning in 1923, Vice President Calvin Coolidge learned that Warren G. Harding, the country’s 29th president, was dead. Coolidge’s father, a justice of the peace, administered the oath of office, hastily found in an encyclopedia in the family library. And Coolidge was president.

The Coolidge homestead is a typical New England farm and underscores Coolidge’s dedication to thrift and hard work. It remains as it was on that morning in 1923—a great addition to a Vermont Fall Foliage tour! (Insider Tip: This is a state historic site and closes for the season on October 14, 2012.)

Touring the Coolidge site, I was struck once more by the fact that some of our presidents truly have come from humble beginnings. That is no myth. 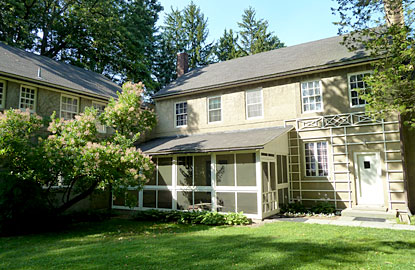 At the opposite end of social and economic spectrum is the Hyde Park estate of Franklin D. Roosevelt, the only president elected four times. Overlooking the Hudson River about 90 miles north of New York City, the site includes Roosevelt’s lifelong home, "Springwood," as well as "Top Cottage," built to "escape the mob" at the main house, and Hyde Park’s Rose Garden where Franklin and Eleanor Roosevelt are buried. Also on these grounds is the FDR Library and Museum, the first presidential library, operated by the National Archives.

Not far from Hyde Park is Val-Kill, the home of Eleanor Roosevelt, still one of America’s most admired women, and the only National Historic site dedicated to a First Lady.

A trip to Hyde Park and Val-Kill are filled with reminders of FDR’s extraordinary impact on a nation facing both the Great Depression and World War II—and from a wheelchair, no less—his polio-crippled legs largely hidden from most Americans.

Well there you have them. Don’t forget that this is an extremely abbreviated and eastern-flavored list. There are 43 men who have become president and all of them have stories worth knowing that are marked with historic sites. The National Park Service offers a complete list by president.

See as many as you can. Then you will know for certain the answer to a very old question: "Who is buried in Grant’s Tomb?"

By entering this sweepstakes, you will be subscribed to the Fodor’s newsletter. You may unsubscribe at anytime.