10 Free Things to Do in Amsterdam 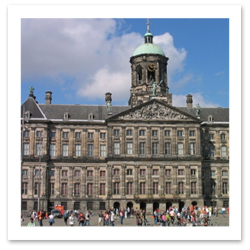 With dozens of museums, theatres and concert halls, more than 150 art galleries, and close to a thousand cafés, Amsterdam has got something for everyone. The only thing missing are bargains, especially now that the dollar is down about 8% against the euro. Still, there are good deals to be had in Amsterdam, and here are 10 of ’em.

1. Buy the I AMsterdam card. It’s not free, but for €53 (about $64) you get free access for three days to public transportation, all city museums, and many tourist attractions. The card also entitles you to discounts (average 25%) at more than a dozen terrific restaurants.

2. Stroll beside the canals of the Jordaan. Once home base for Rembrandt, this lively neighborhood is now the place to find many of Amsterdam’s most interesting shops and galleries. This is also where you’ll find Amsterdam’s best “brown cafés,” so-called because their interiors have been tinted brown with age and cigarette smoke. Have a beer at Café Chris (Bloemstraat 42), which opened in 1624. If you need to use the facilities, note that the toilet is flushed by a handle on the wall in the bar.

3. Hang out in Vondelpark, 120 acres of gardens traversed by footpaths and waterways. Here, tarot and palm readers will help you peek into the future, jugglers and fire-eaters and other entertainers will amuse you, and from the beginning of June to the end of August there are free concerts, open air theatre, and other performances in the small amphitheatre on the island near the centre of the park.

4. Visit Dam Square. All streets seem to lead here. It’s near the Royal Palace, the Nieuwe Kerk, and the War Memorial, not to mention many shops and restaurants, so don’t expect solitude. But you don’t need to spend a cent to be entertained here. The people watching is superb, and the square is a stage for many festive street entertainers. Do remember, though, to tip the “living statues” before you take their picture—they can get very cranky if you forget.

5. Visit the Red Light District. This is where the ladies of the evening conduct their business. At night, the district is packed with tourists—and those who prey on them—but it’s relatively safe as long as you mind your wallet and stick to busy, well-lighted main streets. Walk down Trompettersteeg Alley, proud home to the greatest concentration of brothels in the city, and Oudezijds Voorburgwal, once the site of 16 different convents and monasteries and now filled with brothels, novelty shops and theaters. Don’t take any pictures of the ladies or your camera will likely be promptly tossed into a canal by a very large man.

6. Check out the art scene. Spui (pronounced “spow”) Square has a book market on Fridays and an art market on Sundays where local artists show their work, much of it affordably priced. It’s a pretty, peaceful place to relax and browse. Nearby is The Begijnhof, a medieval courtyard that functioned as a sort of convent. Inside the enclosure, look for house Number 34, the oldest house in Amsterdam and one of only two remaining wooden houses in the city (after a series of devastating fires, laws were passed in 1521 outlawing structures made entirely of timber).

7. Stop and smell the roses. Amsterdam’s Bloemenmarkt is the world’s only floating flower market. The flower stalls are all on houseboats, and besides the fresh blooms there are bulbs and sacks of seeds available for export directly to your home garden or terrace. But you don’t have to buy anything to enjoy the market—just sit on one of the terraces for a while and enjoy the extravagant colors and fragrance.

8. The ferries crossing the IJ channel between Centraal Station and Amsterdam-Noord are free; so come aboard for a short harbor cruise. When you disembark, take a walk along the North Holland Canal. You’ll pass the canal’s entrance basin where ships wait to enter the locks. Make sure to stop for a snack or meal at waterside resturant Het Tolhuis at 7 Buiksloterweg, near the ferry landing, before you head back to the city.

10. The Amsterdam Arts Adventure is an assortment of festivals and events taking place in Amsterdam from June through August. Some events are free, and all are gently priced. Among the Adventure offerings is De Parade, a carnival of theatrical performances that runs from July 28 through August 13, 2006, in Martin Luther King Park. Expect musical revues, magic shows, comedy, film, and much more. The annual Amsterdam Canal Festival, in August, brings together more than 70 classical-music concerts along two of the city’s main canals. Check with the tourism bureau for information and discount packages for Arts Adventure events.

Rent a bike: Amsterdam is set up for cycling. MacBike rents out high-tech, brightly colored bicycles, Frederic rents plain, simple black ones. Prices start at €10 a day (about $12). When you rent your bike, also rent a couple of good locks—bicycle theft is a constant problem.

Order a rijsttafel: A rijsttafel meal consists of anything from 10 to 30 samples of Indonesian dishes, some super spicy, others merely very perky, all served with mounds of rice. Prices start at about $15 a person. Remember too that there are dozens of Indonesian restaurants in Amsterdam. You can’t go wrong with Idrapura or Kantjil.

Stroll the negen straatjes: Or the “nine little streets” that angle off from Amsterdam’s grand canals. The streets are home to Amsterdam’s quirkiest shops. One sells only buttons, another eyeglasses, still others only cookware, cheeses, toys or toothbrushes. Walking is free, but you’ll want to buy something. Thankfully the prices here tend to be reasonable.

Ride the Culture Cruise: The €15 all-day tickets for the Museumboot (Museumboat), which sails to the top tourist spots—the Rijksmuseum, the Anne Frank House, the Maritime Museum, and the Central Station—includes a 50% discount on many museum entrance fees, so Museumboot is a good deal if you’ve decided not to purchase the I AMsterdam card.

Swill suds: If you’ve ever wondered what it’s like to be a bottle of beer, “The Heineken Experience” at the Heineken Brewery will answer all your questions. The highlight of the tour is a happy spin down the conveyer line as you pretend to be a bottle of beer waiting to be processed. You can also take a virtual ride through Amsterdam on a beer delivery truck. Beer lovers are likely to think the admission fee of €10 is a steal; you get three beers and a gift (a drinking glass) at the end of the tour. Bottoms up!