News Apeksha Bhateja It's a Tie: The 2 Most Annoying Airline Passenger Behaviors of 2022
News10 Foolproof European Attractions for Kids

When my kids were very young, my husband’s company offered us a two-year transfer to London. Being avid travelers—albeit ones who’d had our wings temporarily clipped by parenthood—we debated whether to go for approximately three seconds.

“Should we do it?” he whispered into the phone from his carpet-walled cubicle. In eight years of marriage I had seldom heard him sound this excited.

“Oh my God! Let me think for a second—yes!” I replied. Then I ran around the house hopping and yelping in the manner of a person who has received either a large income tax refund or a painful bee sting.

We traveled all over Europe, and learned an important lesson: in order to travel with kids, you’ve got to think like a kid. Save the cathedrals and museums for another trip. Here are ten European attractions that your kids will love. 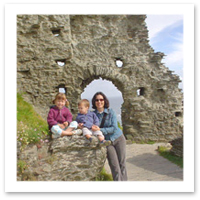 Of all the dozens of castles we visited in Europe, this was our favorite. Perched on a windswept island high above the sea in Cornwall, the ruins of Tintagel Castle spark the imagination of kids and parents alike. Coins and pottery fragments found at the site hint at 3rd-century Roman origins, and local legend holds that King Arthur was conceived here. Access to the castle itself is via 100 very steep steps, so hold those little hands tight.

When your kids tire of Parisian monuments, take them to the petshop-lined Quai de la Mégisserie (along the Seine on the right bank between Pont Neuf and Pont au Change). The shops here sell everything from cats and dogs to squirrels, toucans, goats and ferrets, and browsing them is truly a unique experience.

The breathtaking architecture of the pedestrianized central square in Siena’s old town will almost certainly be lost on your kids. Sip espresso and admire the scenery while they chase pigeons and throw coins into the Fonte Gaia. Afterward ask for directions to the Pinocchio store, where they stock a mind-blowing selection of handmade wooden likenesses of the famous fictional character.

While the 17,000-year-old cave paintings in the Dordogne are a thrill to adults, kids can have a hard time grasping history (let alone prehistory). A better choice is the otherworldly cave at the Gouffre de Padirac, also known as the Devil’s Doorway. The 90-minute tour here begins with a boat ride on an underground river, and continues on foot past some of the biggest stalagmites I’ve ever seen. The cave stays at a constant 55 degrees, so bring a sweater. 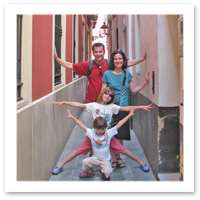 There’s no shortage of great monuments in Andalusia’s best-loved city, but your kids will love the cramped alleyways of the Barrio Santa Cruz best. The pedestrianized medieval Jewish quarter feels more like a maze than a city, and in many places you can stand in the middle of a street, reach out, and touch both walls.

The Tower of London

If you gloss over the gruesome parts (namely the execution of Anne Boleyn in 1536, and the sinister disappearance of the princes in the tower in 1483), the Tower of London is perfect for kids. They’ll love the yeoman warders, the legendary ravens, and the crown jewels. It’s expensive, but worth it.

Dominating the landscape in County Kerry are the McGillycuddy’s Reeks—the highest mountain range in Ireland and the best place to see them is from Killarney National Park. All manner of tours and transport are available, but the best are the pony trap tours from Kate Kearney’s Cottage to the Gap of Dunloe. If it rains (and it will) you can snuggle up under the wool blankets that are provided.

I normally avoid theme parks both at home and abroad, but made an exception for this historic amusement park and pleasure garden. Said to have been the inspiration for Disneyland, the park opened in 1843 and retains much of its old-world charm.

One of only three inhabited islands in the Elafiti chain off the coast of Dubrovnik, car-free Lopud Island is a great spot for families. After a short ferry ride, you disembark and walk on a hilly footpath across the island to the shallow, white sand bay at Sunj. Rent chairs and beach umbrellas and stay all day.

With Edinburgh Castle at the top and Holyrood Abbey at the bottom, the main street of Edinburgh’s old town has a lot to see. If your kids tire of walking, hop on a vintage open-top bus. The tour points out such sites as the Greyfriars Bobby monument (a dog so faithful he kept watch over his master’s grave for 14 years) and Nicolson’s Café (where single mom J.K. Rowling apocryphally wrote the first Harry Potter book while her baby snoozed in her car seat beside her).

Jamie Pearson is a writer and mother of two. She sees the funny side of family travel, and blogs about it at www.TravelSavvyMom.com.