Hawaii is heaven for travelers who never stop exploring. Here are our favorite places to surf, hike, and everything in between. 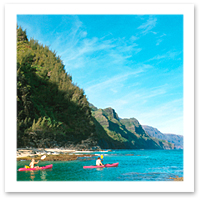 In its second year and second issue, National Geographic Adventure ranked kayaking Napali Coast second on its list of America’s Best 100 Adventures, right behind rafting the Colorado River through the Grand Canyon. That pretty much says it all. It’s the adventure of a lifetime in one day, involving eight hours of paddling. Although it’s good to have some kayaking experience, feel comfortable on the water, and be reasonably fit, it doesn’t require the preparation, stamina, or fortitude of, say, climbing Mt. Everest. Tours run May through September, ocean conditions permitting. In the winter months sea-kayaking tours operate on the South Shore—beautiful, but not Napali. More on Napali Kayaking »

Several companies offer guided bike tours down Haleakala. This activity is a great way to enjoy an easy, gravity-induced bike ride, but isn’t for those not confident in their ability to handle a bike. The ride is inherently dangerous due to the slope, sharp turns, and the fact that you’re riding down an actual road with cars on it. That said, the guided bike companies do take every safety precaution. A few companies offer unguided (or as they like to say “self-guided”) tours where they provide you with the bike and transportation to the mountain and then you’re free to descend at your own pace. More on Maui Biking »

Travel up into the valley beyond Honolulu to make the Manoa Falls hike. Though only a mile long, this path passes through so many different ecosystems that you feel as if you’re in an arboretum. Walk among the elephant ear ape plants, ruddy fir trees, and a bamboo forest straight out of China. At the top are 150-foot falls with a small pool not quite suited for swimming but good for wading. This hike is more about the journey than the destination. Make sure you bring some mosquito repellent because they grow ’em big up here. Behind Manoa Valley in Paradise Park. Take West Manoa Rd. to end, park on side of road, and follow trail signs in. More on O’ahu Hiking »

Bounded by 2,000-foot cliffs, the Valley of the Kings was once a favorite retreat of Hawaiian royalty. Waterfalls drop 1,200 feet from the Kohala Mountains to the valley floor, and the sheer cliff faces make access difficult—which is where your ATV comes in. You’ll see expansive black-sand beaches, the falls, and the lush rain forest surrounding the top edge of the valley. More on Big Island ATV Tours »

Between Maui and neighboring Kaho’olawe, 3 mi offshore from Wailea, is the world-famous Molokini Crater. Its crescent-shaped rim provides a sanctuary for birds and marine life and draws masses of snorkel and dive tours year-round. Most snorkeling tour operators offer a Molokini trip. The journey to this sunken crater takes more than 90 minutes from Lahaina, an hour from Ma’alaea, and half an hour from the South Shore.More on Maui Snorkeling »

Dive at Shark’s Cove and Tables

The best shore dive on O’ahu is Shark’s Cove (Across from Foodland in Pupukea) on the North Shore, but unfortunately it’s only accessible during the summer months. Novices can drift along the outer wall, watching everything from turtles to eels. Veterans can explore the numerous lava tubes and tunnels where diffused sunlight from above creates a dreamlike effect in spacious caverns. It’s 10- to 45-feet deep, ready-made for shore diving with a parking lot right next to the dive spot.

Three Tables is just west of Shark’s Cove, enabling you to have a second dive without moving your car. Follow the three perpendicular rocks that break the surface out to this dive site, where you can find a variety of parrot fish and octopus, plus occasional shark and ray sightings at depths of 30 to 50 feet. It’s not as exciting as Shark’s Cove, but it’s more accessible for the novice diver. Increase your caution the later in the year you come to these sights; the waves pick up strength in fall, and the reef can be turned into a washboard for you and your gear. Both are null and void during the winter surf sessions. More on O’ahu Diving » 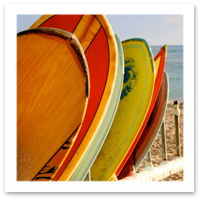 You can’t learn to surf in a day, but with the proper instruction, you’ll probably manage at least a ride or two—and the thrill is unforgettable. Upper body strength is a must. Beach boys offer quickie lessons; if you’re serious, look for a reputable surfing school with multiday training sessions. Waikiki, with its well-shaped but diminutive waves, remains the perfect spot for grommets (surfing newbies). More on Big Island Surfing »

Though it suffered some damage in the October 2006 earthquakes (a large chunk of the cliffs overhead broke off), this bay remains one of the most beautiful spots on the island. Dramatic cliffs surround crystal-clear, turquoise water chock-full of stunning coral and tropical fish. Before the arrival of Captain Cook in the late 18th century, this now tranquil state marine park and sanctuary lay at the center of Hawaiian life. Historians consider Kealakekua Bay to be the birthplace of the post-contact era. More on Big Island Snorkeling »

Just outside of Hulop’oe Bay, the boat dive site Cathedrals was named the best cavern dive site in the Pacific by Skin Diver magazine. Shimmering light makes the many openings in the caves look like stained-glass windows. A current generally keeps the water crystal clear, even if it’s turbid outside. In these unearthly chambers, large ulua and small reef shark add to the adventure. Sergeant Major Reef, off Kamaiki Point, is named for big schools of yellow- and black-striped manini (sergeant major fish) that turn the rocks silvery as they feed. The site is made up of three parallel lava ridges, a cave, and an archway, with rippled sand valleys between the ridges. Depths range 15 to 50 feet. More on Lana’i Diving »

If we had but one day to spend in rural O’ahu, we’d spend it walking the back road along the rocky shore at the island’s northern tip. Ka’ena, a state park as well as a protected natural area, comprises 850 acres of undeveloped coastline that centers on the point where it is said the souls of the ancient dead leapt into the eternal darkness. The views are incomparable; shells can be scavenged in keyhole coves in calm weather; whales spout offshore during winter; and threatened native plants flourish. It’s a trek that will change your mind about O’ahu being “too crowded.” More on O’ahu Hiking »