News Apeksha Bhateja What Are the Chances You'll Get Monkeypox at a Hotel?
News10 Coolest Attractions in Bangkok

Visitors to Thailand’s famous (and infamous) capital have no shortage of sightseeing options. With enough ancient temples, notorious districts, and reputable restaurants to fatigue even the most devout checklist traveler, other Bangkok attractions often get short shrift. So when you’ve ticked off the Royal Palace, the reclining Buddha, and the raunchy stuff, check these places out for something a little different.

1. Just upriver on the opposite bank from the Buddhist echos of Wat Pho is the far more temporal Siriraj Medical Museum. This controversial “Museum of Death” is decidedly not for the squeamish. Housed in the Siriraj Hospital Complex, it features a number of exhibits depicting the the myriad diseases, disorders, and disasters that plot our downfall. Most of the exhibits, far from being gratuitous, are actually highly informative. But the section that houses mummified remains and preserved body parts has spurred its fair share of controversy. 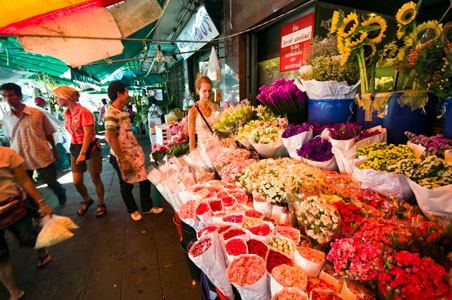 2. To get your head in a better place after Siriraj, hop on a ferry and head down the Chao Phraya to the Flower Market (Pak Khlong Talat). The market blooms with color and fragrance, and is most active in the early hours of the morning when trucks of flowers arrive from around the country. 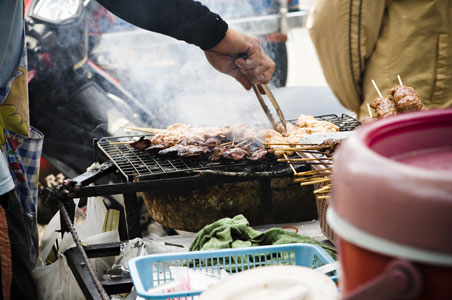 3. And if the calming effect of the flowers has settled your stomach, return to Siriraj to sample the varied cuisine at the Wang Lang food market. In a city known for street food, Wang Lang has the highest density of good, cheap eats. Select dishes from one of the many stalls and sidle up next to a student or Siriraj Hospital doctor for a great lunch on the cheap.

4. When it comes to Bangkok markets, Chatuchak weekend market, the largest covered market in the world, reigns supreme. But for a more eclectic experience, Chinatown’s Khlong Thom market is your port of call. Khlong Thom is knickknack central. Savvy shoppers bring their flashlights to hunt for treasures among the market’s dimly lit stalls on busy Saturday nights, which has lent Khlong Thom the nickname “Flashlight Market”. If there’s a mad scientist in Bangkok who needs a spare part or some strange bronze figurine or ancient child’s toy, he’ll seek it out at Khlong Thom.

5. Khlong Thom and the Flower Market are best explored at night when they’re most alive. If you do try to navigate Bangkok’s markets during the heat of the day, you’ll be dripping within minutes. Bangkok is the hottest major city in the world, FYI. So if after you’ve filled up on delicious street grub you still have a hankering for a bit of the ironic, you should head to Sub-Zero Ice Skate Club. Found on the fourth floor of Esplanade Mall in Ekkamai, Sub-Zero provides a truly incongruous slice of cold weather bliss. In the evenings, it turns into a proper night club, complete with DJs and a performing team of figure skaters. 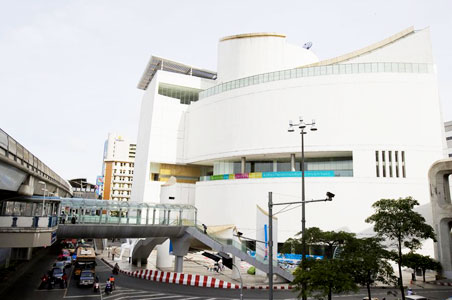 6. Though Bangkok lacks a true downtown like other major cities, Siam serves as a de facto focal point. It’s an area filled with massive megamalls and posh shopping. Amidst this commercial jungle, a cultural flower bloomed in 2008 in the form of the Bangkok Arts & Culture Center. This terrific contemporary art museum is still largely anonymous, hidden behind BTS tracks and fronting on a massive intersection. But it’s a huge building, housing cafes, bookshops, and restaurants to complement the extensive painting and sculpture collection and rotating exhibits. Its downstairs library is a great place to relax and read a book, and the museum is free.

7. For an artistic experience of the flash-and-bang variety, Bangkok has plenty of cheap cinemas to choose from. However, for the price of a theater outing back home, you can get treated to one of the most hi-so movie experiences this side of the red carpet at the Bangkok Airways Blue Ribbon Screen at Paragon Cinema. $20 gets you the movie ticket, complimentary drinks and appetizers, a foot massage, and sequestered seating in the most comfortable chairs in any theater in the world.

8. When modern conveniences like remote-controlled chairs get to be too much, know that the past is always there for you in the form of the House of Museums, a private collection of objects from daily life in decades past. Open only on the weekend and fairly difficult to find, this small museum is nonetheless a Thai favorite for the sense of nostalgia it induces. Even a foreign visitor can’t help but feel a little wistful at the 60s and 70s kitsch on display.

9. But if there’s a light feeling of nostalgia from Thai objects from yesteryear, for a visitor to the Batcat Toy Museum the nostalgia may be debilitating. One of Thailand’s odder museums (which is saying something), Batcat houses a mind-boggling number of action figures, toys, and entertainment merchandise. If you’ve at all been privy to pop culture in the past several decades you’ll find something you recognize, but this museum was no doubt designed for man-sized little boys. 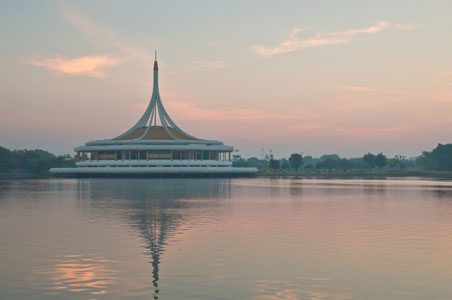 10. And when you’ve finally had enough of the crush of Bangkok, head to Rama IX Park on the outskirts of the city for a breather. The massive 200-acre park is the largest green space in the city and was built to celebrate the King’s 60th birthday in 1987. There are interesting sights in the park, like the International Garden, where seven countries are horticulturally represented. But really it’s an opportunity to escape the intense thrall of Bangkok’s powerful magnetism.