10 Best Airports to Get Stuck In

The layover, traditionally a dreaded word among travelers, has become considerably less painful as of late – at least, in certain airports. Indeed, the savviest aviation hubs nowadays have evolved far beyond bland-at-best food, cramped seating areas, and outdated design with such offerings as sleeping pods and showers, reclining chaises, gyms, and, of course, free Wifi throughout. Though you still may not hope for a layover, you’ll certainly dread it much less at these 10 airports that get it right. 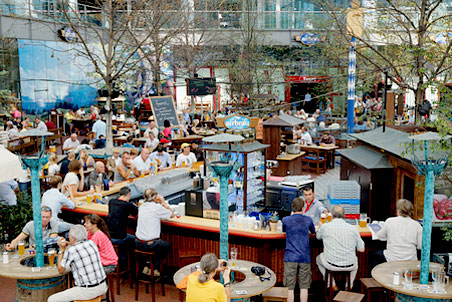 Why We Like It: It’s all about the beer in Germany, and even if you’re only connecting through Munich, its airport offers plenty of ways to savor the country’s best brews. Airbräu is a Bavarian-style tavern complete with its own beer garden and on-site brewery, where beer enthusiasts can watch the brewmaster in action. (If time allows, the sleek Fit & Fly Spa at the Kempinski Airport Hotel offers a great way to burn off your brewski beforehand.) And design aficionados should stroll through über-modern Terminal 2, with an eye-catching blend of sweeping sails, towering metal beams, and grand windows that enable stunning views of the runway. 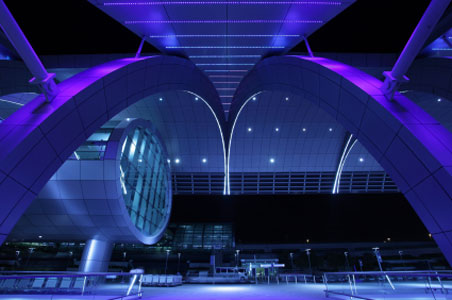 Why We Like It: Like everything else in Dubai, its airport is over-the-top, extravagant, and unforgettable, with world-class shopping (unsurprisingly) at the top of the amenity list. The Middle East’s largest aviation hub houses the world’s largest duty-free airport shop, at a whopping 58,000 square feet, as well as bling-y extras like vendor stands where big spenders can stock up on gleaming gold bars (seriously). In addition, the immaculate, sleek interiors also house a 24/7 G-Force Gym, with a pool, massage, and shower area. Open air gardens with mist machines add to the exotic, upscale vibe.

Insider Tip: Fancy living, not just traveling, in the lap DIA’s brand of luxury? Enter for a (1/5,000) chance to win $1 million in the airport’s long-running Dubai Duty Free raffle; "Finest Surprise" raffles are also available for a luxury car and motorcycle. 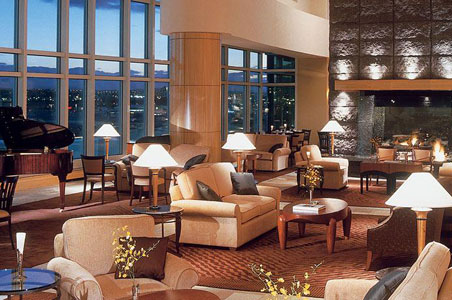 Why We Like It: Like Vancouver itself, the city’s gorgeous airport boasts a modern, maritime vibe that provides a welcome antidote to air travel. Amenities and extras include a revolving sushi bar, native art from the Pacific Northwest, and a branch of Vancouver’s aquarium, with a 31,000-gallon tank full of sea creatures native to the region. Indulge in jetlag-busting and anti-fatigue treatments at any of four separate spas, or cozy up by the soaring fireplace at the swanky JetSide Bar (at the in-airport Fairmont Hotel) with a glass of wine from the world-class Okanagan region. And shoppers, take note: A 460,000-square-foot luxury outlet mall within the airport may soon be in the works.

Insider Tip: The airport provides a chaplaincy for quiet meditation and prayers, or, for those who want to get hitched before their flight, a wedding service, including a ceremony on the top deck of a 747. 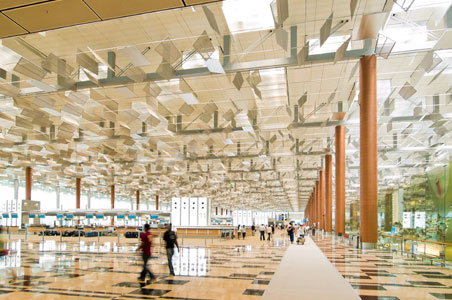 Why We Like It: With a butterfly garden, free movie theaters, and a 40-foot, swirling slide that’s the tallest in Singapore, Changi feels more like Alice’s modern-day Wonderland than an airport. Changi has garnered more than 400 awards, and it continues to add new delights to its already-impressive list of enticements. A recent highlight is Terminal 3’s live butterfly garden, one of five total gardens throughout the airport, which boasts more than 1,000 butterflies, a 27-foot waterfall, and loads of native plant species. Passengers can also take a refreshing dip in the airport’s Balinese-themed rooftop swimming pool.

Insider Tip: Make sure to stop by the airport’s post office, where you can send perhaps your first "Wish You Were Here" postcard from an airport (and mean it). 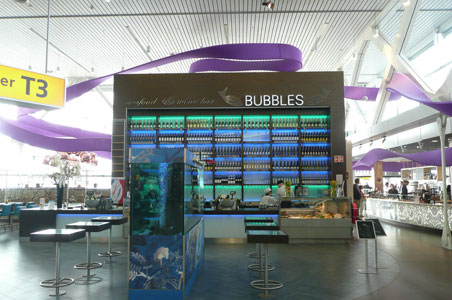 Amsterdam’s major international hub is a sophisticated blend of art, shopping, and dining that’s all kinds of Dutch, right down to the wooden clogs and delectable chocolates. Art enthusiasts won’t want to miss a stop at the free Rijksmuseum Amsterdam Schiphol Airport, the first museum in the world to be annexed in an airport, with free admission and both permanent and temporary exhibits. Duty-free is done right here, too, with 75 shops and a Shop & Collect program for enterprising travelers who get their souvenir shopping done ahead of time. Finally, for passengers craving nothing more than peace and quiet, the Silence Centre is just the ticket, offering a calm, device-free sanctuary.

Insider Tip: It’s easy to lose track of time in Schipol’s vast expanse of offerings—who’d rather be on a plane than in the Bubbles Seafood and Wine Bar?—so make sure to allow plenty of time to get to your gate. 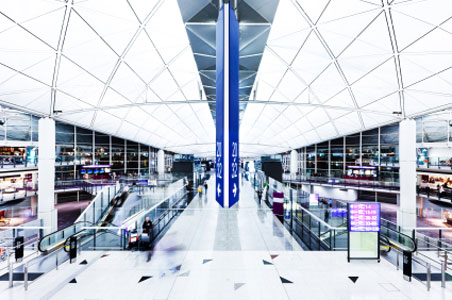 Why We Like It: Sitting on a man-made island off of Hong Kong Harbor, this bustling futuristic airport and its endless entertainment options keep the hordes of travelers passing through happily occupied. Most striking is an outdoor, nine-hole regulation golf course, open 24/7, where links-loving travelers can squeeze in a round or two. For sports action with a more high-tech flavor, check out the iSports simulator for basketball, soccer, and auto racing. Travelers craving some downtime can settle into the IMAX movie theater, the world’s first in an airport, that shows both 2D and 3D films.

Insider Tip: Two Travelers’ Lounge locations offer an excellent option for private rejuvenation, with hot showers, food, beer, and wireless, and a choice of three-, six-, and 12-hour passes, starting at around $50. 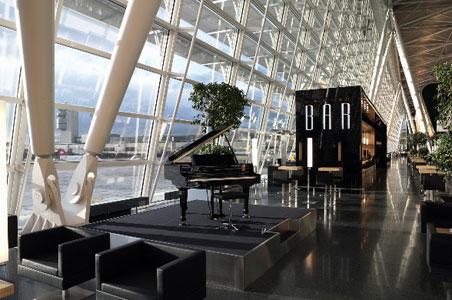 Why We Like It: Zurich’s international airport, one of Europe’s busiest, is a model for modern, efficient design, clear signage, and helpful employees—all elements that are especially important for travelers. There are plenty of restaurants and duty-free shopping options, too, including a variety of famed Swiss timepieces and stacks of the country’s world-famous chocolates. For active-minded travelers, the airport also offers rental services for bikes and inline skates—an excellent way to shake off long hours in an airplane seat while enjoying the spectacular scenery of Switzerland.

Insider Tip: The airport underwent a four-year renovation that ended in 2011, out of which came two rooftop terraces with observation points, media installations, and a kids area with a mini-plane and tower for budding aviation enthusiasts to explore.

Bonus Tip: If you’re taking the Skymetro rail between Terminals A and E and hear a distinct "moo" or two, don’t start looking around for smuggled livestock; it’s simply the sounds of the Alps being piped in over the audio system. 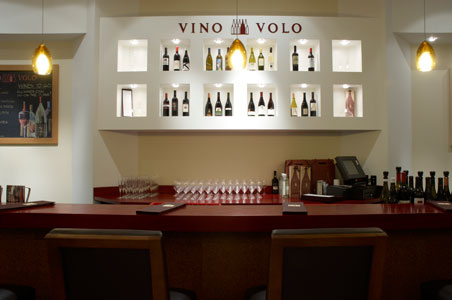 Why We Like It: Where else can you sip California wine, snag a few loaves of sourdough bread, and squeeze in an "ohm" or two before your flight? Though the most-buzzed-about recent addition to SFO is its peaceful, yet pocket-sized (just 150 square feet) Yoga Room, located in the beautiful Terminal 2, there’s plenty else about this smart airport to make travelers smile. The Airport Museum hosts interesting art, science, and cultural exhibits, while a branch of the Steinhart Aquarium has aquatic wildlife from around the world. Stock up on nifty souvenirs like cube clocks and collapsible colanders at the SFMOMA Museum Store, or make like a Bay Area foodie at local favorites like The Plant Café for tasty, organic fare, the Anchor Brewing Company for its beloved beer, and Perry’s, an outpost of San Francisco’s classic tavern.

Insider Tip: For a tasty flight before your flight, grab a stool at Vino Volo in Terminal 2, which serves up pours of California wines perfectly paired with small plates. 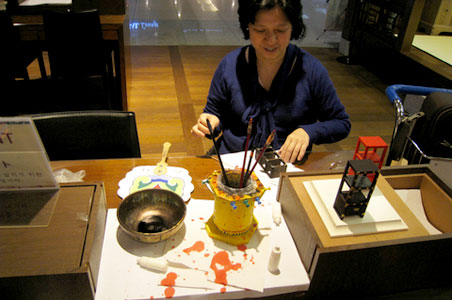 Why We Like It: Interactive cultural activities, a driving range, complimentary movie zones, multiple areas for fueling up, logging on, or chilling out—what’s not to like about this perennial favorite among savvy travelers? No wonder, then, that Incheon grabbed the coveted top spot for Best Airport in the World by airport review site Skytrax in 2012. It sets the gold standard for culture (take in a 12-stringed Korean harp performance or learn how to make a traditional Korean paper handicraft in one of two “Cultural Experience” zones); convenience (easy, efficient Wifi throughout, and free laptops provided); plus excellent entertainment (a nearby golf putting course and a "faux" ice skating rink are just two of the ways to while away your time). 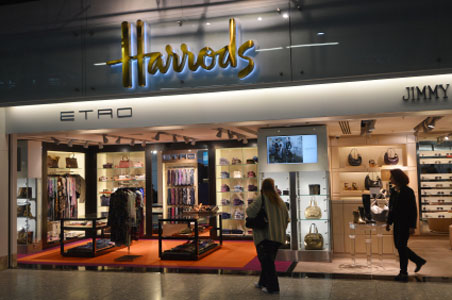 Why We Like It: From oodles of duty-free stores offering the likes of Burberry, to a Gordon Ramsay restaurant and pubs perfect for relaxing over a few pints, Heathrow hits the mark for what can be a lovely, quintessentially British layover experience. The flagship Terminal 5 is a fashionista’s dream, with heaps of high-end shops and an 11,000 square-foot Harrod’s. For travelers who fancy a dose of culture, check out the Terminal 5 Expo, an exhibition showcasing British sculptors, painters, and photographers. In addition, the airport recently announced that it will spend $40.7 billion on overall improvements and the completion of Terminal 2 by 2019.

Insider Tip: If you want to get in on the happening scene at Ramsay’s Plane Food in T5, make sure to make reservations beforehand.