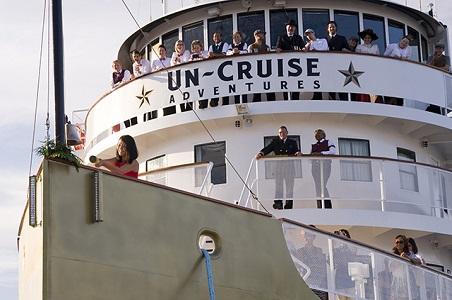 No matter how much you may love the mega-ship experience, with all of its many bells and whistles, there's something special and splurge-worthy about embarking on a small ship, like those in Un-Cruise Adventures' fleet. For one, you’ll be traveling with dozens of other passengers, instead of thousands. Plus, you'll get to know the ship as if it were your own private yacht, and set off to off-the-path ports that the bigger ships just can't get to, so that shore excursions can afford a more in-depth exploration of the destination.

This summer in Alaska, Un-Cruise Adventures is now offering seven theme cruises on two different ships: the 88-passenger S.S. Legacy and the 86-guest Safari Endeavour. The voyages will feature onboard experts in the fields of wine, photography, music, and marine biology. If you haven’t yet given small-ship cruising a try, signing on for one of these special itineraries might be just the opportunity. 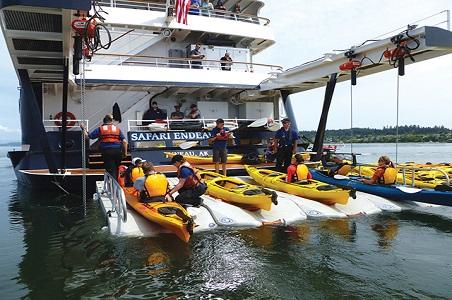 First, consider which ship is right for you. S.S. Legacy is a replica coastal steamer oozing lots of old-world charm, while the Safari Endeavour is a recently renovated yacht equipped with a launch platform that makes boarding a skiff, launching a kayak, or taking off on a stand-up paddleboard a breeze.

Music heightens the mood of any voyage, so Un-Cruise Adventures has invited the 1940s-style singing group, Letters from Home, to perform aboard its “Alaska’s Golden History” voyage, embarking on June 22, 2014. The trio will perform three-part harmonies, and even throw in bit of tap dancing, and a few comedy routines, for good measure. The Juneau to Ketchikan itinerary will focus on the state’s Klondike Gold Rush era.

Whether you’re a novice or a seasoned photographer, you’ll appreciate the two photography-themed voyages that Un-Cruise Adventures has developed. On June 29, board Safari Endeavour in Juneau and join professional photographer David Julian, who will share tips for capturing the essence of places, people, and light. Award-winning documentary photographer and videographer, Billy Howard, will likewise join the August 17 cruise to share his advice for storytelling through photography.

There's much to learn about wildlife in Alaska, so Un-Cruise is bringing aboard two respected guest lecturers in the field of marine biology. Professor, lecturer, and photographer Jackie Hedgpeth will join the ship on its July 6 and July 13 journeys, where she’ll discuss the physiology, feeding, mating, and survival behaviors of marine organisms. Or, on August 10, Gary Freitag, an Alaska resident and faculty member in the public service unit of the School of Fisheries and Ocean Sciences Sea Grant Program, will educate passengers about marine biology, oceanography, and the salmon fisheries of Alaska.

Balance your outdoorsy Alaska adventure with your love of wine on this June 15 voyage, which welcomes vintner Kevin Correll, owner of Woodinville, Washington’s Barrage Cellars. Since launching his winery in 2005, he's received numerous honors from the Seattle Wine Awards and Wine Advocate.

Andrea M. Rotondo is a freelance writer based in New York City. She covers cruise news and luxury travel trends for Fodors.com, Condé Nast Traveler, CruiseCritic, and other websites and magazines. Her latest book is Tom Petty: Rock ‘n’ Roll Guardian. Follow her on Twitter: @luxtravelmavens.