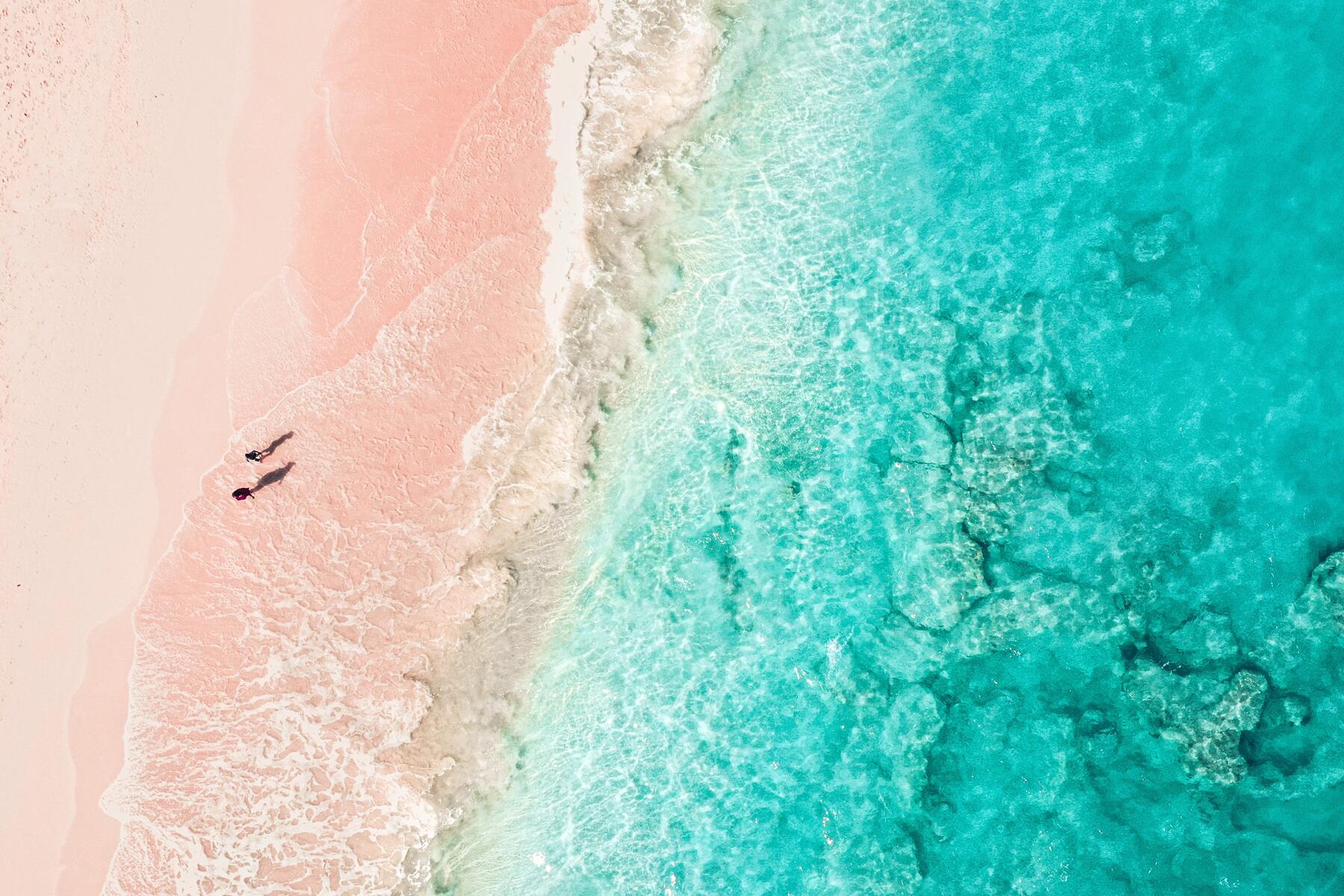 Coronavirus Apeksha Bhateja "Cruises to Nowhere" Are a Thing. But Are They Worth the Risk?
Home  >  Cruises & Crossings • News   >   Cruise Preview: Royal Caribbean’s ‘Quantum of the Seas’ Debuts 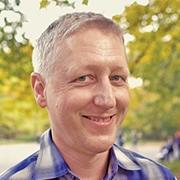 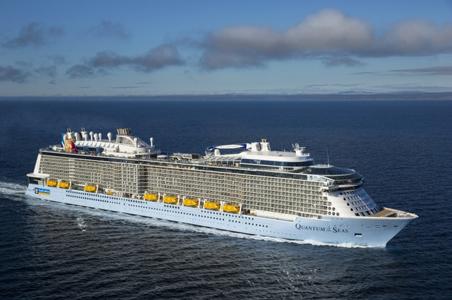 Royal Caribbean International’s newest and most lavish ship, Quantum of the Seas, was christened at the Cape Liberty cruise port in Bayonne, NJ, on Friday afternoon by godmother Kristin Chenoweth and chairman and CEO Richard Fain. The new “smartship” is the first of three nearly identical vessels that have been commissioned and that will be delivered over the next two years (her sister ships will be Anthem of the Seas and Ovation of the Seas, debuting in Spring 2015 and Fall 2016 respectively). One of the world’s most technologically advanced cruise ships, Quantum will sail to the Caribbean from Bayonne through May 2015, when she will be redeployed to Shanghai. After a quick, two-night sneak peek, here are just a few of many highlights you’ll discover onboard. 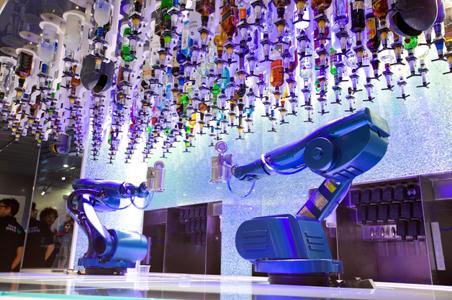 One thing that sets this ship apart are its many technological achievements, and the improvements begin at the beginning of your voyage, with virtually effortless check-in (which, granted, begins at home) that will get you from the curb to the ship in as few as ten minutes (and, yes, this actually does work). Other improvements are Wi-Fi that actually works at near DSL speeds in most parts of the ship; WOW bands, which are similar to Walt Disney World’s MagicBands and give you access to your cabin and your shipboard account (even allowing you to charge purchases onboard); even a pair of robot bartenders who can mix you an old standard or a drink of your own creation. Virtually every crew member you see is armed with an iPad and can take your drink or your dinner order and get it to you in record time. And a new day-and-night gathering spot that is both a bar and a theater of sorts, is Two 70º, an amazing technical achievement in itself with robotic video screens and a sweeping effects-laden electronic curtain hanging over the back of the ship (more on that in entertainment below).

Coronavirus Apeksha Bhateja "Cruises to Nowhere" Are a Thing. But Are They Worth the Risk?
Continue Reading Article After Our Video 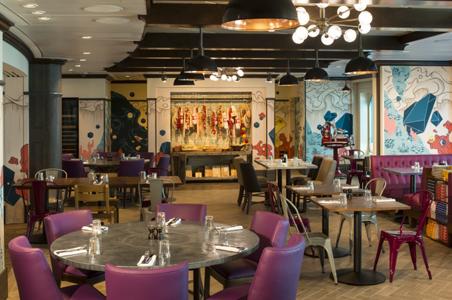 Perhaps the biggest change for Royal Caribbean is the total abandonment of set dining times and big-scale restaurants. Instead, there are 18 different dining venues, including five main restaurants seating around 350 passengers, each with a different menu, and a wide variety of specialty restaurants, both casual and upscale (most with extra charges of $25 to $45 per person or à la carte pricing). Passengers choose their own dining times for any restaurant they wish. The complimentary dining options on Quantum are some of the most impressive at sea, and the quality of the food in the buffet area and main restaurants is really quite good, with food appearing in record time—and all of it cooked to order (thanks in part to those iPads, which whisk orders to the kitchen instantly).

Royal Caribbean has teamed up with three big-name chefs to bring their own branded specialty restaurants on board, including Jamie Oliver, whose Jamie’s Italian is a casual Italian spot; Michael Schwartz, who has developed a gastro-pub concept called Michael Genuine Pub (which also serves its own proprietary brand of beer); and Devin Alexander, who has a calorie-conscious restaurant called Devinly Decadence at Solarium Bistro is just off the Solarium spa pool.

But the whimsical Wonderland brings a genuine molecular dining experience to the ship in a casual but elegant venue, and it’s certainly one of the more unique dining experiences at sea. Another new concept, The Café @ Two70, serves pressed sandwiches and made-to-order tossed salads, among other offerings. Some Royal Caribbean favorites are also represented on the ship, including the intimate Japanese restaurant and sushi bar Izumi, Chops Grille, Chefs Table, and Sorrentos pizzeria.  And of course there’s room service, a mix of complimentary and for-charge options, but the room-service Continental breakfast remains complimentary; you only pay for room-service breakfast if you order cooked food. 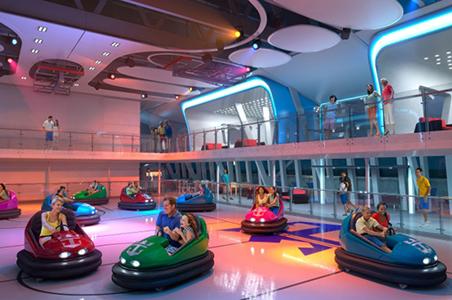 Another area where Quantum excels is in its entertainment offerings, both the performances and other options. The ship has a rather long list of brand-new activities, every single one of which is complimentary. Some of these include bumper cars, rollerskating, a trapeze workshop, a giant Xbox entertainment center, and full basketball court. Most of these are housed in the soaring, multi-purpose SeaPlex sports center, which may draw people who have never visited a sports court before. Just outside is a climbing wall, surf simulator, and Ripcord by iFLY, a skydiving simulator. 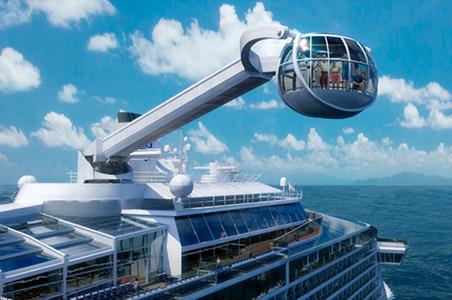 If that’s not enough, the North Star observation arm will take you more than 300 feet above the ship, offering a genuinely thrilling 15-minute 360° view of both ship and sea. It’s an audience-pleasing first for a cruise line that has been offering firsts for decades.

Performances are equally exciting and include a special-effects laden, acrobatic and dance extravaganza called “Starwater” that is performed in the technologically advanced Two 70° lounge; the same venue can also present “virtual” concerts by big-name acts on its giant Vistarama video screens (which were developed especially for the Quantum-class ships). There’s also Music Hall, which features cover bands and over live performances, and a full theatrical production of Mama Mia (complete with 15-minute intermission). Another new offering is “Sound Odyssey”, which features an “Earth Harp” and a soaring drum wall as well as singers, dancers, and musicians. 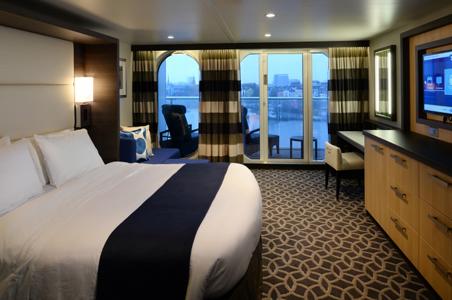 Accommodations are not an afterthought. Larger and more attractive than the staterooms on any other Royal Caribbean ship, they are well thought-out, offering a generous amount of storage space, soothing earth-tone fabrics, and flat-screen TVs with integrated web-surfing. Clusters of family-connected staterooms can accommodate up to 10 guests (as long as some of them are children who are willing to sleep on pull-out sofas). The staterooms range from lavish, loftlike luxury suites to small single “studios” with balconies. All inside cabins also have “virtual balconies”, floor-to-ceiling projection screens that show an actual view outside the ship in real time that simply dissolves the claustrophobic feeling of the typical inside stateroom. Guests can actually draw curtains over these “windows” or wake up with the sun by leaving them open. (The virtual balconies can also be turned off, though it’s hard to think of why one might want to do that.) And Wi-Fi works in cabins, just as it does in the public areas of the ship (though not quite as robustly).

Rates from $1,099 per person for an inside cabin on an 8-night cruise; visit www.royalcaribbean.com.