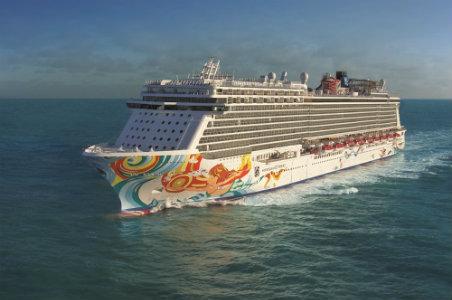 With the arrival of its much-buzzed-about Norwegian Getaway in New York City earlier this week, Norwegian Cruise Line has unveiled one of the year's most anticipated big-ship debuts. Sister ship to the cruise line's NYC-based and -themed Norwegian Breakaway, which debuted to much acclaim in May 2013, the Getaway arrived in New York Harbor for a brief stopover en route to its intended home base of Miami. Once there, it's slated to sail a series of year-round, seven-night Eastern Caribbean itineraries come February, but not before being transformed into a stationary Bud Light-themed floating hotel in New York, set to coincide with the area's Super Bowl festivities this weekend). Fresh off the boat from a sneak-peek, two-night preview cruise, here's the full report on what to expect onboard.

From the first glimpse of the 4,000-passenger Getaway's festive hull, designed by Miami-based pop artist David “LEBO” Le Batard, with a colorful sun-and-sea motif centered on a whimsical mermaid, you'll get a hint of the ship's fun and lighthearted character to come. Getaway's Miami hometown roots resonate thematically throughout the ship, with high-energy drinking, dining, and entertainment venues rife with local cultural nods to tropical- and Latin-influenced food, drink, music, and more.

Look, too, for other culinary highlights like Moderno Churrascaria (a Brazilian-style steakhouse), La Cucina (Italian fare), and Cagney’s Steakhouse (NCL's signature American steakhouse). Plus, in a newly launched partnership, dining venues are supported by a wine list curated by the esteemed Mondavi wine-making family of Napa.

Miami and Latin influences abound in venues like The Tropicana Room, a retro-feel supper club recalling Miami Beach nightlife of the '40s and '50s, with menu choices like ceviche and steak, as well as the tropical-themed outdoor venue Flamingo Bar & Grill, where patrons can sample pulled pork, spinach empanadas, and tres leches cake.

For dedicated nightlife, the Latin flavor seeps through to the Sunset Bar, with a design scheme that recalls Ernest Hemingway's Key West, and the island-themed, rum-focused Sugarcane Mojito Bar. Or, to cool off during your Caribbean cruise, the Svedka/Inniskillin Ice Bar touts icy design accents meant to reflect the Art Deco-style of Miami Beach's Ocean Drive, and a bar, seats, and glasses all etched out of ice (not to worry, Caribbean-minded packers—parkas are provided).

Round out an evening at the Bliss Ultra Lounge nightclub, with its dance floor and DJ-spun dance tunes. And if all that's not enough, every sailing will feature a fireworks-fueled dance party at the ship's outdoor club, Spice H20. 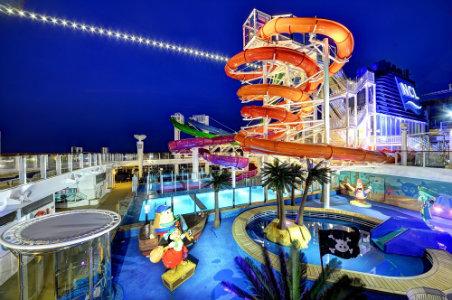 For kids of all ages, the three-story outdoor sports complex features a water park with five multistory waterslides and two swimming pools, a mini-golf course, basketball court, rock climbing wall, and more. For an extra shot of adrenaline, brave the elevated ropes course, with features like a zip track and “The Plank,” a platform that extends eight feet over the ship's side.

You can ditch the wee ones entirely at adults-only outdoor enclaves like the Spice H2O sundeck lounge, with its hot tubs and waterfall feature, or at the Vibe Beach Club, with its oversize Jacuzzis and massive chaise loungers (an extra-fee access pass for Vibe is required). There's also a massive, 23,000-square-foot spa and fitness center complete with spa facilities that include a therapeutic salt room, and a state-of the-art gym.

Come nightfall, a bevy of entertainment venues, in addition to the standard casino and bars/lounges, beckon. Rolling out on the heels of this year's Grammy Awards, the Getaway features the first Grammy Experience at sea, with a museum featuring artefacts curated by the L.A.-based Grammy Museum, and nightly live performances by a rotating roster of Grammy winners and nominees.

The ship also debuts The Illusionarium, a dining-and-entertainment experience focused on magic and special effects. There's also a Broadway production of Legally Blonde; the high-energy, Latin-inspired dance show Burn the Floor; the dueling pianos of Howl at the Moon; and comedy headliners from Levity Entertainment Group. 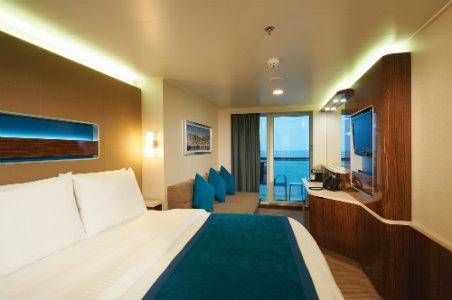 The ship offers all standard stateroom options, along with some more specialized units like its dedicated Spa Suites, touting easy spa access and special spa amenities and privileges, as well as Studio staterooms, designed—and priced—for solo travelers, with access to a private studio lounge. The Getaway also features a ship-within-a-ship concept, The Haven, with 42 upscale suites tucked into the ship's top level, accessible only by private key-card, and privy to exclusive extras like a dedicated pool area, lounge, concierge desk, and restaurant.

Modern-day explorer, perpetual seeker, and diligent travel scribe Elissa Richard is a contributing editor and journalist for numerous American travel publications, including Fodor's, Condé Nast Traveler, Travel + Leisure, Yahoo, and more. Based in Brooklyn, NY, she has traveled to and reported on some 55 countries and 20 cruise lines around the globe, and has resided in Argentina, France, England, Denmark, and the Netherlands. Contact her at [email protected]il.com.